This past week was the 65th anniversary of the Polaroid Land Camera.  That news sent me scurrying around the house to see if I still own a Polaroid camera.  Apparently I don't, although there have been several in my past.  My favorite was the Polaroid Captiva which, rather than ejecting the exposed pictures out of the camera, slid them into a compartment on the back of the camera where, via the clear back panel, you could view them without removing them from the camera.  The camera was manufactured through 1997, and I imagine someone at Polaroid thinking that the in-camera viewing trick was cool because it was like looking at the screen on the back of a digital camera.

Although my Captiva has gone the way of all things, I did find this in the back of a desk drawer: 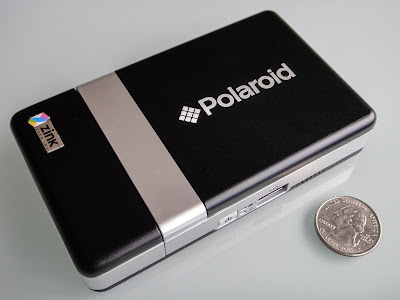 The Polaroid PoGo, a wireless, battery powered, bluetooth, portable printer.  It makes tiny 2 inch by 3 inch prints (you can peel off the backing paper, and they become stickers) and requires no ink due to dye crystals embedded in the paper which are activated by a laser in the printer.  Lasers.  Sweet.

You can actually still buy this thing but let's face it, it hasn't taken the world by storm.  Sure, it has its flaws.  The battery life is good for a chuckle.  And the print quality won't take your breath away, or at least not in a good way.  But really, who cares?  It's a tiny, portable printer, what do you expect?  The PoGo failed not because of flaws in design or execution (or even due to its stupid name), but because we simply don't care.

It seemed like a brilliant idea to me and I bought one the second it came out.  It seemed brilliant to me not because I thought we all need printers in our pockets, but because it was easy for me to imagine a future in which we said, "Remember when we use to have to put ink in our printers?  What a pain in the ass that was."  Instead, we have a future in which we say, "Remember printers?"

The primary benefits of the original Land Camera, the already-ancient PoGo, and the Polaroid company itself, were instant gratification and immediate dissemination.  As such, the reasons for their irrelevance today are too obvious to belabor.  A world in which we all have tiny computers in our pocket which can not only connect to vast, world-wide databases of information from essentially anywhere, but can take pictures to boot may be a strange world, but it's a clear and direct descendant of the world in which Land's daughter, perhaps apocryphally, asked him, "Why can't I see it now?"  The human urge which created Polaroid in the first place virtually assured its eventual obsolescence.

And yet.  Shouldn't any world we make have room for the quirky and beautiful and delightfully outmoded?  For the fascinatingly useless?  For an attention to arcana so focused and obsessive we can't help but feel a bit of gleeful amazement?  The answer, apparently, is yes, yes, and yes.


Clicking "Play" is like asking me to steal 49 seconds of your life.

Posted by Benjamin Warde at 5:28 PM